Asus has followed up on its gaming phone efforts with the second-generation ROG Phone 2 which has also emerged to be one of the fastest mobile devices ever launched. That should be hardly surprising though considering that gaming phones require a lot of processing punch, and the new ROG Phone 2 does have enough of that to make it through even the toughest of games with élan.

Making up the core of the new ROG Phone 2 is the new Snapdragon 855 Plus chipset which works in conjugation with a huge 12 GB of RAM along with an equally massive 512 GB of native storage. What also makes the gaming phone outfitted with the new Snapdragon 855 Plus special is the processor’s inherent feature set which includes Game Fast Loader and Game Junk Reducer. Needless to say, both are supposed to make gaming performance all the more superior though it remains to be seen how much of a change it can bring along.

Among the other stand-out feature of the new ROG Phone 2 is the fitment of a massive 6000 mAh battery, which is among the largest ever fitted on a mass-market mobile. That again is understandable considering that gaming erodes charge faster than anything else.

Asus has said the battery should be able to sustain PUBG game playing for 7-hours at a stretch. This, however, applies to the screen refresh rate set to 60Hz which is half of what the phone is capable of. This brings us to the other notable aspect of the phone, that of its screen refresh rate. Asus has gone for the fitment of an OLED panel – 6.6-inch of it – having a max refresh rate of 120Hz. That, however, is user adjustable and can be brought down to save on battery power. 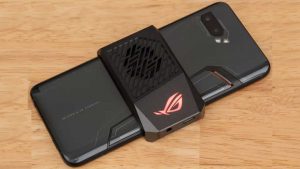 Apart from the higher refresh rate, Asus is also claiming the display to be four times more sensitive than the Galaxy S10. This naturally translates to much higher levels of screen sensitivity for touch controls. Other salient features of the ROG Phone 2 include an under-screen fingerprint sensor, a 48-mp primary shooter as well as an integrated vapour chamber for better heat dissipation.