The much talked about Samsung Galaxy Note 10 is finally here, and there’s no stopping the excitement over the real thing even though we have had pretty accurate leaks in the months preceding the actual launch. The phone simply looks stunning in flesh, which together with the amazing features it comes with makes it one of the best flagship phones Samsung has ever come up with.

The 2019 Note 10 offering is also special on several counts, one among which is that there are two Note 10 models on offer this time, which again is another first. The Note 10 is understandably smaller and has fewer features less than the Note 10+ which has a more flamboyant spec sheet. No wonder, Note 10 also costs less – about $949 compared to the $1099 that the Note 10+ commands.

Among the other, more notable aspects with the Note 10 range include the lack of the 3.55mm headphone jack which Samsung justified saying most S10 users don’t use it anyway. Plus, it also helped free up some more space as well, thereby enabling the fitment of slightly larger batteries on both devices.

To smoothen the transition, Samsung has packed in a USB-C headphone as a part of the package though users can also opt for the 3.5mm adaptor dongle at an additional $10. Samsung is among the last major manufacturer to let go of the 3.5mm headphone jack and probably won’t have it on any future device either.

Both the phones come powered by the Snapdragon 855 chipset and offer 256 GB of storage for the base version. The Note 10, however, comes with 8 GB of RAM while the Note 10+ has 12 gigs of it, along with a 512 GB storage version as well. Both phones run the latest Android 9.0 Pie.

Unfortunately, the Note 10 lacks support for external storage, which again is another first for a Samsung flagship. That isn’t the case with the Note 10+ though which supports a microSD card of up to 1 TB max. The Note 10 comes with a 3500 mAh battery compared to 4300 mAh for the 10+. Both are capable to wirelessly charge other devices.

Coming to imaging abilities, a 10 mp front-facing camera is standard across the range, as is the basic design where the camera is accommodated inside the front punch hole. Interestingly, the punch hole is bang in the middle in Note 10 compared to the top left corner on the S10 range.

Also, it’s a single-lens front camera system for both the Note 10 phones instead of an elongated hole featured in the S10+. Samsung said that has to do with the better software this time which eliminates the need for an extra lens for the depth effect.

The rear camera setup on both the Note 10 and 10+ is also similar in that both come with the same triple-lens arrangement. That comprises of a 12 mp wide-angle lens, a 16 mp ultra wide-angle lens and a 12 mp telephoto lens all of which again is the same as on the S10+. However, the 10+ benefits from a 3D DepthVision camera to allow for better bokeh effects as well as adding cool AR effects. 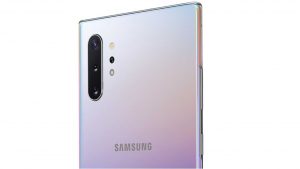 Samsung said the bokeh effect is applicable to even videos as well apart from the usual still images, and the effect does seem mighty well for both videos and still shots. Note 10 also comes with multiple mics to allow for better capture of the sound at source. Plus, there also is the ability to, what can be described as the zooming feature where one can direct the mic to a particular sound source.

Then there also is the built-in video editor that does a good job at applying some nice editing effects right within the phone itself. That includes combining various clips, setting the transition, adding audio tracks and so on, so that one can put together a decent video within mins, and have it shared on the social circle too.

The stylus, which happens to be one of the star attractions of the Note series, too has undergone a major makeover of sorts. That includes support for gesture controls which makes it act much like remote control. That seems somewhat odd for something that is designed to pair with a device that largely would be operated in-hand.

Nonetheless, the stylus can still pull off some tricks, which includes the ability to skip through songs or images, fast forward a video or even zoom in while taking pictures, all from a distance. This apart, the Stylus also excels in its usual role, given that Note 10 can now convert handwritten notes into texts.

Then there also is the feature to draw cool effects on images and even videos. For instance, one can draw a pair of horns on the head of a person in a video, and the horns would remain stuck to the person even while he or she is moving around. Samsung is calling it AR Doodle and it’s some real fun.

Among the other cool features, the Note 10 comes with, includes an under-screen fingerprint sensor which happens to be the same as on the S10. Then there is the cool new Link to Windows feature which allows the Note 10 to be paired with a Windows PC and sync data between the two. One will also be able to see notifications and other messages on the linked Windows device as well.

On the whole, Samsung sure has done a mighty good job with Note 10, and it’s now up to Apple to match the same with its new-gen iPhone devices.

Abhinav Mishra - May 16, 2022
A contrarian take on the current market structure suggesting that the bitcoin bottom is near and the Federal Reserve will reverse its hawkish course.Watch...