Inferse.com
Home Technology Here is how the Apple iPhone 11 Pro Max compares to the... The Google masterpiece – Pixel 4 – is out of the woods in its official avatar. That, however, fails to make the phone evoke a lot of interest given that it has already been the subject of numerous leaks and revelations for months before the launch.

But then, given that it has finally hit the street, a compare with something of the same sort from Apple does make sense. So, here is the compilation of how the Pixel 4 XL shapes up to the iPhone 11 Pro Max.

First things first, the Pixel range has always been slow to adapt to the latest market trends and the same applies to the new Pixel 4 XL as well. The phone does seem a bit odd with its rather thickish upper bezel while almost none exists elsewhere. All of that might make one believe the phone is held upside down given that most phones have zero bezel at the top and little bit of it at the bottom. 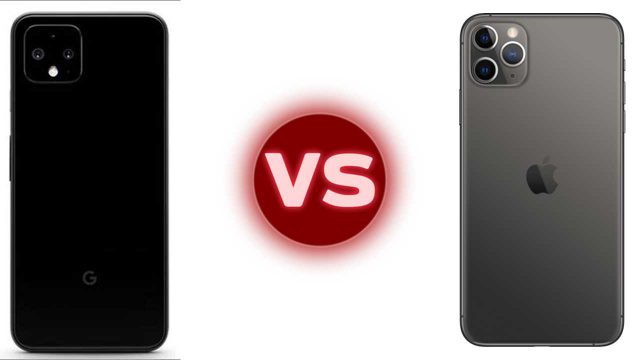 The iPhone 11 Pro Max is a better looker here even though it’s the 2018 look that the phone is continuing with. So there still is the wide notch at the top which sure is a lot wider according to the latest design standards where the year’s flagships have gone for zero bezel looks all round. Anyway, the iPhone 11 Pro Max can be considered to have a balanced look even though there isn’t anything too special with it anyway.

Both the phone, however, have nearly identical display sizes. That happens to be 6.5-inches on the iPhone 11 Pro Max while the Pixel 4 Xl boasts of a slightly smaller 6.3-inch display. The Google phone, however, prevails when it comes to screen resolution – 3040 x 1440 pixels vs 2688 x 1242 for the iPhone 11 Pro Max. No wonder the Pixel 4 XL has a higher pixel density of 537 ppi compared to 458 ppi for the Pro Max.

Both are of the OLED type though, with Apple preferring to term it Super Retina XDR OLED while Google said the Pixel 4 XL boasts of Flexible OLED with Ambient EQ and Smooth Display. Another highlight of the Google phone is its 90 Hz refresh rate.

Again, no surprises here as it’s the same Qualcomm Snapdragon 855 processor that powers the Pixel 4 XL, as it does to most other Android flagships. Google also mentioned there is the Pixel Neural Core as well for added processing muscle as well as 6 GB of RAM.

The iPhone 11 Pro Max too comes with a Neural Engine mated to an A13 Bionic chip which Apple claims is the fastest it has ever been on any smartphone. Then there is 4 GB of memory as well, though that isn’t anything Apple has officially admitted.

Both phones start with the same storage capacity, 64 GB though Apple offers wider storage options – 256 GB and 512 GB. The only other storage options available with the Pixel 4 XL is 128 GB. None of the phones offer support for external memory chips.

Here again, Google has been slow to give in to the latest trend and has stuck with a single lens primary cam when dual lens cams were the craze. Now when more-the-better is what phone manufacturers have gone for, Google has chosen to go for a dual-lens setup for its Pixel 4 XL. The dual-lens setup, however, has been accommodated in a rather elaborate squarish housing at the top left which also has space for a time of flight sensor as well.

Specifically, it’s a combo of the 16-megapixel telephoto camera alongside a 12.2-megapixel wide-angle sensor that the phone comes with. Other tech bits that the camera comes with include phase detection, optical and electronic image stabilization system, etc. Then there is a spectral and flicker sensor for the telephoto along with dual-pixel phase detection for the wide-angle lens.

The iPhone 11 Pro Max is one up given that it comes with a three-lens primary camera. However, the camera housing is of the same square type as on the Pixel 4 XL. The iPhone also uses the same 12 mp sensor, each for telephoto, wide, and ultra-wide shots. The wide and telephoto lens makes use of optical image stabilization feature while the former also benefiting from 100% focus pixels as well.

It must also be said Pixel phones have always been a great shooter and the latest Pixel is only expected to carry on with the same legacy. Apple too is boasting something similar with the 11 Pro Max, which applies to shots in ultra-low light conditions as well.

For selfies, the Pixel 4 XL comes with an 8 mp unit which again is Auto-HDR compatible. For the 11 Pro Max, there is the HDR-compatible 12 mp front shooter.

Google has provided the Pixel 4 XL with a 3700 mAh battery with fast charging support. There also is an 18W fast charging adapter included in the box. For the 11 Pro Max, there is a 3969 mAh battery which too is accompanied by an 18 W charger that Apple claimed can provide for 50 percent charge in just 30 mins.

The same happens to be the now-familiar Face ID for the Apple device and all of the tech wizardry – sensors, cameras, etc – behind it accommodated in the wide notch at the top. Apple is also claiming to have further refined the feature to make it more accurate and secure.

However, Google too has adopted the same on the Pixel 4 XL, ditching fingerprint sensor in the process. For this, Google has gone for the Titan M security chip which encrypts and stores the face data. It, however, would be too early to state if the face recognition feature on the Pixel flagship is as secure as Google is claiming.

Both Apple and Google claim their phones to support gesture control feature though the latter has gone a step ahead to include radar technology on the Pixel 4 XL. That makes the phone to be able to determine the presence of things even if it’s held some way off of the display. So this comes in handy for controlling the phone even from a distance as the device can still pick up hand movements. So, users can pull off acts like skip a song or snooze an alarm even without physically touching the phone.

The Apple device is the pricier phone with even the base iPhone 11 Pro Max starting at $1099. The Pixel 4 Xl, however, retails at a more comfortable $899 starting price.