We here at Inferse have seen and read about enough smartphone explosions under pillows, in purses, and on desks to know that device overheating is not just a scary rumor, but real. Some individuals have even been hurt by their smartphones that have exploded in car accidents – leaving them with second-degree burns that they’ll battle for the rest of their lives.

Such burns are unfortunate, but they serve as a powerful reminder that our smartphones aren’t just “toys,” but a combination of chemicals, build materials, operating systems, and software. The latest Snapdragon 810 fiasco with Qualcomm is a real-life case whereby consumers can be negatively affected by overheating processors.

The summertime with its hot temperatures in the high 90s and low 100s, particularly in the Southern, Southeastern, and Western US, brings another circumstance whereby smartphone batteries can explode. American vehicle manufacturer General Motors is looking to bring a smartphone cooling system to a new lineup of vehicles. The system, called Active Phone cooling, will blow cold air onto a smartphone while it sits on a shelf beneath the car dashboard. 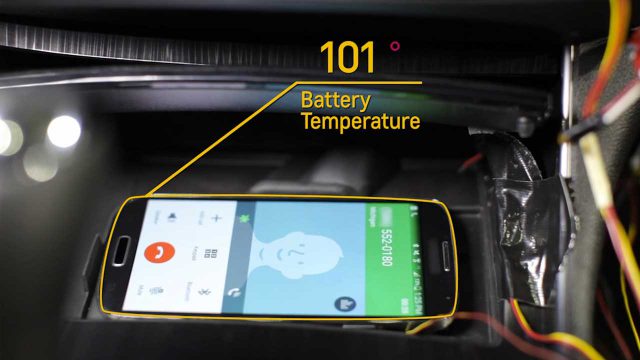 The constant cool air will help the smartphone cool off so that it won’t overheat after sitting in the car for an hour or two, for example, while an individual shops in the mall (such a person may not carry his or her phone if the battery dies earlier in the day while they’re away from phone).

It’s incredible that, even in the tech-savvy age in which we live, battery technology hasn’t progressed as quickly as other technologies. We still live on lithium-ion batteries that haven’t been updated much since the 1990s (about 25 years ago), and few manufacturers have advanced the fight with water-resistant batteries that will not explode due to overheating and other elemental impact.

The new system will work with vehicles that are wireless charging-compatible, which means that a number of vehicles currently on the market won’t qualify. General Motors says that its 2016 Chevy Malibu, Chevy Cruze, Chevy Impala, and Chevrolet Volt series will all come with wireless charging and General Motors’ Active Phone cooling system.

General Motors has also promised the market a fully electric-powered vehicle, dubbed the Chevy Bolt EV, in 2017 – and it’ll be interesting to see if the battery-powered vehicle will incorporate the new wireless charging AC system. With the Bolt EV’s expected park-and-retrieval voice command technology implementation, we’re sure the wireless cooling system will make its way to this futuristic vehicle as well.