by Abhinav Mishra
in Business
Reading Time: 2 mins read
A A 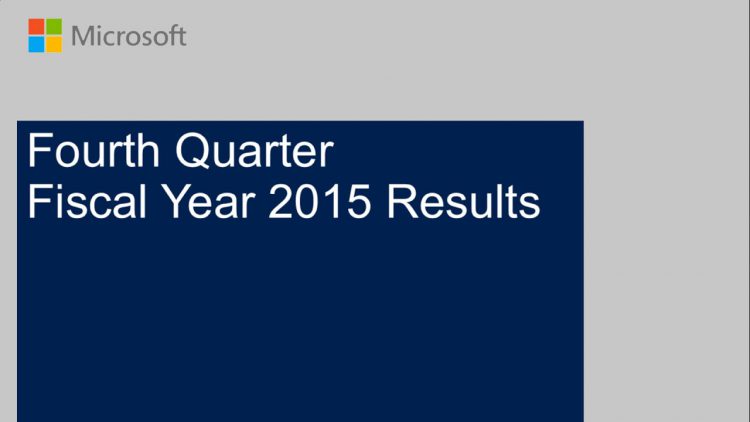 Microsoft Corporation (NASDAQ: MSFT) has posted its fourth quarter earnings for the financial year 2015 with a record quarterly loss of $2.1 billion. The figures clearly reflect the massive write-down of its Nokia acquisition that Nadella announced earlier this month, though still delivered the promise in terms of revenue growth in their cloud business.

By the numbers, Microsoft had $22.18 billion revenue for the quarter that is down 5.1 percent year-over-year. Gross margin for the fourth financial quarter was $14.7 billion, while the net operating income came down to a $2.1 billion loss, eventually resulting in a loss of $0.40 per share.

Net loss was higher again at $3.2 billion, which was largely due to changes made to segments like hardware and cloud under Nadella’s leadership. Revenue from hardware sales was strong, as Surface revenue rose to $888 million while Xbox sales recorded a 27 percent gain, selling 1.4 million consoles compared to the 1.1 million sold in the same period last year.

Meanwhile, Bing also is now generating more revenue as its market share in search now stands at 20.3 percent, while Nadella believes that Bing will transition into more profitability in the coming fiscal year. Office 365 has added more than 3 million customers in this quarter, and commercial cloud revenue is going strong which is up by 88 percent.

Microsoft is going through a transition under Nadella’s leadership, as its changing the way it does business as seen with the forthcoming launch of Windows 10. Nadella has been constantly stressing on the whole Windows ecosystem approach for that unified Windows experience for users across devices.  He believes that a unified approach would attract more developers and users on the platform, as it would make the whole Windows ecosystem much more integrated and interconnected across different platforms and devices.  The company is heavily focusing on its cloud services and is reportedly planning to acquire an Israeli startup Adallom for $320 million to further bolster its cloud platform.

“Our approach to investing in areas where we have differentiation and opportunity is paying off with Surface, Xbox, Bing, Office 365, Azure and Dynamics CRM Online all growing by at least double-digits,” Microsoft Chief Executive Officer Satya Nadella said in a statement. “And the upcoming release of Windows 10 will create new opportunities for Microsoft and our ecosystem.”

Besides the record loss, the numbers posted are a pretty good indication of the transformation the company is witnessing under CEO Satya Nadella. And unlike its catastrophic foray into the mobile business, its cloud services numbers would definitely bolster investor relations and find new customers.