The Galaxy Note 5 is set for a reveal next Thursday, and images continue to provide insight into what consumers can expect from Samsung’s “next big thing.” There are even newer images than what we’ve shown here at Inferse, and you won’t have to wait until next week to know whether or not the Note 5 is the phone for you.

We’ve already seen the metal edges and Gorilla Glass 4 build, but the latest images show the same that we’ve seen in days past – confirming the photo leaks that have come before now. In other words, Samsung’s build quality in the Galaxy S6 and S6 edge will make its way to the Galaxy Note 5, but this also confirms that there’ll be no microSD card slot or removable battery for the Note lineup this year, either. There were a number of Samsung faithful who held out for the possibility of a microSD card slot, saying that Samsung wouldn’t ditch it in the company’s productivity beast, but it’s true: the option won’t be available this year for even the most prestigious device the company makes. 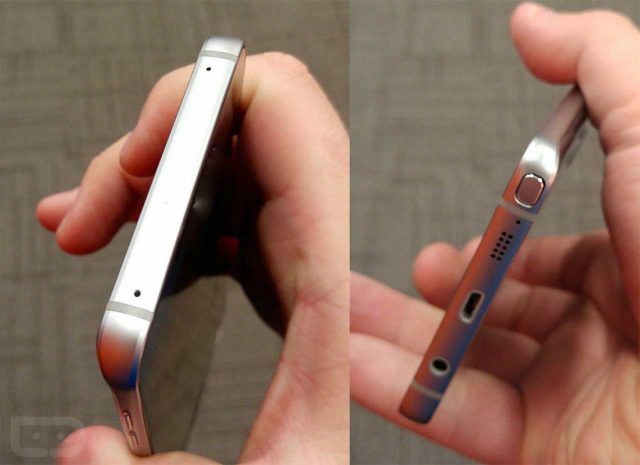 By “People Edge” here, we’re not referring to the actual People Edge of the Galaxy S6 edge. When Samsung introduced the feature in the curved Galaxy S6, it was done with the purpose of providing color-coded contacts that would light up various colors when the phone is turned on its face. What Samsung has done with the Note 5 is that the Korean manufacturer has taken the S Pen stylus window (normally, a wheel of options) and brought a circular layout to the same menu in “edge” fashion with the upcoming device. “Action Memo,” “Smart Select,” “Screen Write,” “S Note,” and “Settings” will all be accessible from the S Pen stylus circular window now.

In the new circular window, however, the rumored image shows the presence of “Instagram,” a Facebook-owned app and company that seems to hint at some sort of customization for users from the S Pen stylus window in the Galaxy Note 5. Could Samsung provide a customization option for the new S Pen pullout window as it’s done for the Ultra Power Saving Mode, or its main toggles on current Galaxy smartphones? We’ve seen Samsung customize the look and feel of Android with its new Theme store for the S6 and S6 edge, so anything’s possible here as well.

Take notice of the fact that the “settings” option is also part of the window that’ll greet you when you pull the S Pen out of its respected slot. Samsung has always had it as part of the drop-down settings menu, but placing it in the stylus window is a nice touch. It’s part of that touch-up polish we’ve come to expect from the top Android OEM that’s earned its place as a giant in the industry.

The Galaxy Note 5 images presented here also show us that the icons for phone, contacts, messages, internet, and the remaining app drawer will have something of a slight upgrade from their current look in Galaxy devices. While current utility icons are surrounded by a “square” shape, the new icon shapes look oval or rounded in nature.

Aside from the customizations with the S Pen stylus window, Samsung looks to bring a Write on PDF function to the Note 5. Some have said that a PDF Write feature isn’t needed in the new Note, but it’s nice to see premium take on more of an identity than involves more than just the look of the device; if consumers have to download 100 apps from the Play Store to get Note-like functionality, then manufacturers have failed. Samsung knows how to provide an out-of-the-box functionality that’s unparalleled in the current smartphone market, and the Note looks to be the best of the company’s work for 2015.

We’ve mentioned the Galaxy Note 5 battery rumors that first stated a 4,100mAh battery, then a 3,220mAh battery. Now, new rumors state that users may only get a 3,000mAh battery this year – a compromise to keep the device thin. Some see this as a reason to not purchase the Galaxy Note 5, but Samsung’s optimizations of battery life with the Galaxy S6 and S6 edge should put the problems to bed. If a 2,550mAh battery gets most users through 18 hours of the day, then imagine what a 3,000mAh battery will do? Getting through a day of battery life won’t be difficult with the device, and you may even find Samsung’s optimizations to provide over a day of battery life. Sure, it’s not the 3,200mAh battery of the Note 3, and the 3,220mAh of the Note 4, but it should be more than enough for most consumers. And fast charging and wireless charging are always there to help.

The processor will be the same as that used in the Galaxy S6 and S6 edge (Exynos 7420), which has proven to be the fastest processor on the market currently.

What are your thoughts on the Galaxy Note 5? Are you pleased with the device, or displeased? What do you want to see in the Note 5? Do your thing in the comments.