BlackBerry has officially confirmed that its first ever Android smartphone will be called ‘Priv’. In addition, the Canadian manufacturer promises it’ll provide constant security updates to its BB10 platform, with version 10.3.3 scheduled for a release in March next year.

Earlier rumors suggested that Priv — rumored as BlackBerry Venice — is expected to get a 5.4-inch QHD display, a Snapdragon 808 chipset bundled with 3GB of RAM. It’ll be powered by Google’s Android OS integrated with BlackBerry’s proprietary apps such as BlackBerry Hub and its Universal Search.

‘BlackBerry Priv’ will certainly be able to differentiate itself from the competition. It’ll run Android backed by BlackBerry’s in-house security and productivity apps. In addition, it’ll come with a slider keyboard for people who would rather prefer the accuracy and feel of physical keys. Though it’s too early to make predictions as to the kind of response the device would get. Nonetheless, we are rather excited to witness a blend of Android and BlackBerry OS; it’ll be interesting to see how much interest the device will be able to generate among the end user. 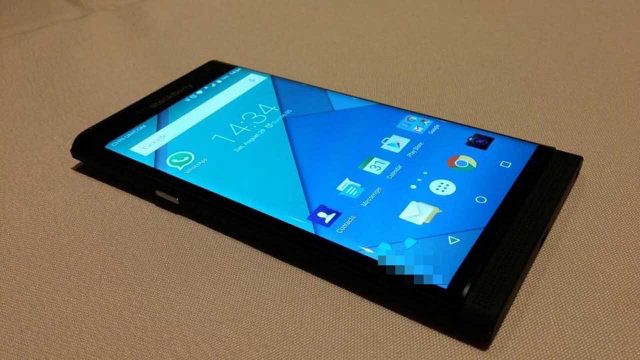 “In combination with BlackBerry’s efforts to support Android for Work on the BES12 platform, the new device will offer best in class security for enterprise customers. BlackBerry expects the device to be available late in the calendar year in major markets in-store and online, and will release further details in the coming weeks,” the company said in a statement.

It is worth pointing out that the upcoming BlackBerry Priv will be the first smartphone from the Canadian manufacturer that’ll be released outside BlackBerry’s proprietary operating systems. BlackBerry has been struggling for quite a while to establish its niche in the smartphone market. The fallen manufacturer who was once at the helm of the mainstream phone market, has been finding it rather hard to reclaim its lost glory. The company, in the past, tried to revive itself with the introduction of new QWERTY based handsets namely Passport and Classic, though the ploy did not work out. Let’s hope the upcoming Priv does the trick for the company.

Aabha Sharma - August 20, 2022
The new Surface Laptop Studio with the 14.4-inch display replaces the previous Surface Book models (13 & 15-inch), which are not available anymore. After...