Amazon has filed for a patent (“Pay-by-Selfie”) that would make it possible for users to authenticate a financial transaction by a selfie. This, according to Amazon, will make for a much more convenient method of payment that otherwise would have required keying in a strong password.

As per the patent application, the user might be prompted to “perform certain actions, motions, or gestures, such as to smile, blink, or tilt his or her head.” Such action will allow the system to confirm the identity of the user while also serving to negate efforts of fraudsters attempting to fool the system using an image of the person concerned.

The search for alternatives to using passwords has gained momentum on the back of the increasing trend among users to shop online via mobile devices. As things stand right now, typing in a password on a mobile is quite cumbersome. Taking a selfie would not only be much more convenient but will also be a fun way to make a payment.

Apple earlier has been the first to use fingerprint scanning technology to allow users to pay online. The technology has since been adopted by other mainstream companies so that smartphones incorporating fingerprint scanner is fast becoming commonplace in the market. 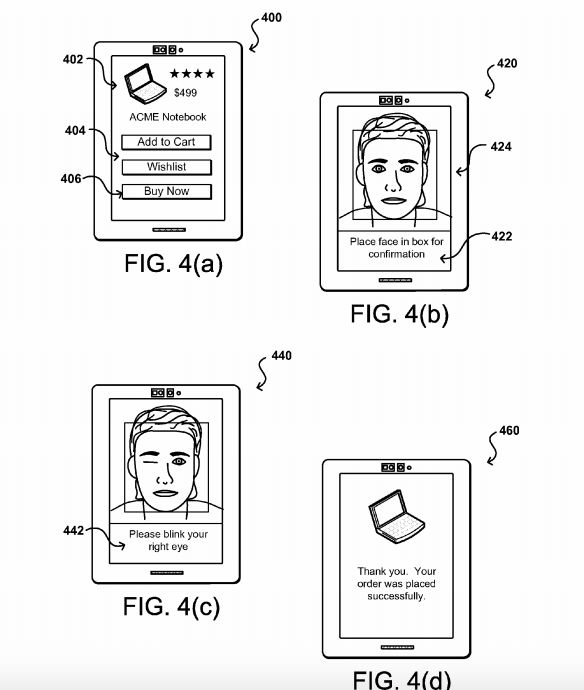 Microsoft has taken things a step further and has made biometric scanning an integral part of Windows 10 itself. This, dubbed as Windows Hello, includes an iris scanner and facial recognition along with a fingerprint scanner to authenticate the identity of the user. Though the authentication method will require having the necessary hardware support, which includes suitable cameras as well as a fingerprint reader, those, according to Microsoft, makes Windows 10 the most secure OS version ever.

Coming back to the Pay-by-Selfie bit, Amazon can’t exactly be considered the pioneers here. MasterCard had previously experimented with the technology in 2015 when users were required to look at the display of their mobiles and blink to allow the system to correctly establish the identity of the user.

The China-based e-commerce giant Alibaba too is known to be developing its own version of pay-by-selfie where users will be required to look at their mobile display while paying for their purchases.

Selfies as logins is also being used within the USAA, a financial services organization dedicated to the U.S. military and their families.

It looks like the front facing cams on mobiles will have a more important role to play then serving the whims and fancies of the selfie maniacs.