Lenovo’s famous Yoga series has a new member – the A12 that starts at just $299. For that much, what you get is a 12.2-inch HD tablet that runs on Android and comes bundled with a Halo keyboard that forms part of several of its pricier tablet offerings.

Built around an Intel Atom x5 processor, the Yoga A12 comes with a 2 GB memory along with 32 GB of native storage. The battery is powerful enough to sustain things till around 13-hours. Then there is the Dolby Atmos speakers as well, all of which no doubt makes the A12 a great entry-level hybrid tablet that is attuned to both productivity and entertainment.

Also, being part of the Yoga range, the A12 can perform all the stunts that its other compatriots are well adept at such as full 360 degrees of rotation. In all, there are four work modes that the A12 can settle in, which includes the tent and tablet form factor that makes it best suited for say watching a movie or surfing the web respectively. The UI too has been modified to suit its built-for-productivity approach so that the A12 can support three apps simultaneously. 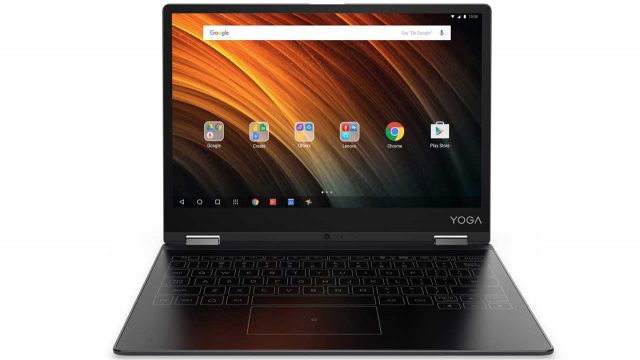 The sturdy build quality also ensures the A12 can take in a fair bit of rough usage as well. That again is aided in no small measure by its magnesium and aluminum construction that allows the tablet to retain its shape even while measuring just 5.4mm at its thinnest point. The device otherwise is available in Gunmetal Grey and Rose Gold color choices.

Special mention must also be made of its unique halo keyboard design that is devoid of any physical keys as such. Instead, it works on touchscreen technology and features haptic feedback, with different levels of pressure invoking different feedback. Besides, the keyboard is also intelligent in that it not only learns and adapts to your typing style, it can even predict your key presses.

Those interested can head off to the Lenovo site that will have the new A12 device on offer from February 8, 2017, with prices starting at $299. The company had earlier launched its Yoga Book series of hybrid devices running Windows 10 but with the prices starting at $500.