The much-awaited OnePlus mid-term flagship device is finally here in the form of the OnePlus 5T. And much like every other 2017 flagship device, the new 5T conforms to the prevalent trend of doing away with the bezels.

The display is also bigger this time – all of the 6-inches of OLED goodness – compared to the 5.5-inch of the OnePlus 5. However, with the bezels gone, there isn’t a comparative increase in the device footprint with the new 5T just marginally taller than its 5 counterparts. The taller stance of the phone is again in line with those of the current flagships such as the Galaxy S8 duo, Note 8, iPhone X, G6 or the Pixel 2 phones.

Among the other salient points of the display is its 18:9 aspect ratio and 1080 x 2160 pixel spread which translates to a nice pixel density of 401 ppi. Then there are several color calibration setting available as well which ensures there is a display sweet spot for almost every user type. Also, the enlarged display and reduced bezel depth has led to the annihilation of the home button, and with it the fingerprint sensor, which has now been shifted to the rear on the 5T. 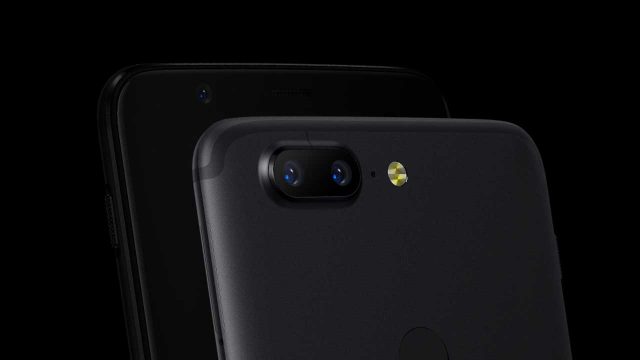 The Chinese manufacturer also introduced some nice changes to the rear camera setup, making the two lenses optimized for low light photography and telephoto shoots this time. The same on the OnePlus 5 followed the usual trend of including a wide angle and telephoto lens combo. The OnePlus 5 didn’t quite impress with its camera, and it remains to be seen if the 5T manages to address that.

The rest of the specs continue to be the same, which include its Snapdragon 835 and Adreno 540 core along with the dual RAM options of 6 GB and 8 GB. The two versions come with 64 GB and 128 GB of storage respectively. Then there also is the same 3,300mAh battery though there is no support for wireless charging yet. Waterproofing is the other feature that might be sorely missed considering that this has become standard on all other flagship phones.

So far as the software is concerned, the 5T comes pre-loaded with Android Nougat, with the promise to upgrade to Oreo at the earliest. However, a nice feature addition on the software side is the new parallel apps feature. This essentially will let the user to create several instances of an app and comes in handy when the user needs to access several accounts simultaneously.