Another OnePlus 6 feature has leaked online -Super Slo-Mo- which refers to the phone’s ability to shoot super slow motion videos without sacrificing on quality. Interestingly, the revelation comes right from the official page of the Indian subsidiary of the Chinese firm.

However, while the page has since been updated to remove the teaser, the same confirms the OnePlus 6 will be able to shoot videos at slow speeds. No other specifications have been revealed though for the phone to match the industry best – read Samsung Galaxy S9 or Sony Xperia XZ2 – the OnePlus 6 will have to record videos at 960fps at the least. 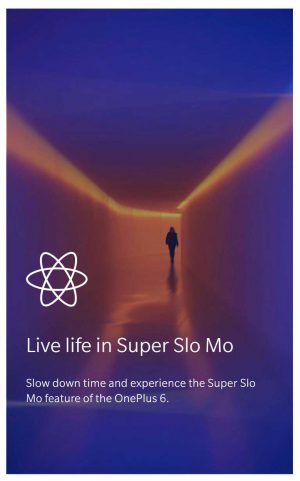 The rest of the specification of the OnePlus 6 known so far include a Snapdragon 845 chipset coupled to an 8 GB RAM on the top end version. The same will also be offering a class-leading 256 GB storage as well. Also, the phone is confirmed to have a notch as well.

However, not sure how buyers might react to the same, the company also revealed there will be a special setting as well to black out the notch if users so wanted. The notch apart, the OnePlus 6 is also expected to come with gesture support of the likes of the iPhone X.

The OnePlus 6 is confirmed for a global launch on May 16.