LG has taken the wraps off of its latest G8X ThinQ which might be a phone – and a thoroughly capable one at that – in its own right but can be easily configured to add two additional displays to enhance its functionality all the more.

All of it comes in the form of a snap-on case to which the G8X can be attached and comes with its display on the inside which is identical in size and other aspects with the phone’s primary display. What’s more, the case also comes with another display, albeit a bit smaller at the front which serves as the place for getting along with quick notifications, time etc.

To start with the basic phone first, it has all the qualities as one would expect out of a flagship device. That includes a Snapdragon 855 chipset at the core complemented by a 128 GB storage and 6 GB memory. The front is dominated by a 6.4-inch FHD+ OLED screen having a tiny notch at the top to house the front cam.

The display also accommodates an in-screen fingerprint sensor for authentication purposes. The G8X also breaks prevalent norms by offering 3.5mm headphone jack when most flagships tend to skip on this. Then there is also a twin 1.2 watts stereo speaker set as well. Power comes from a 4,000 mAh battery which the company claims should sustain operations for little more than a day with both displays operational. 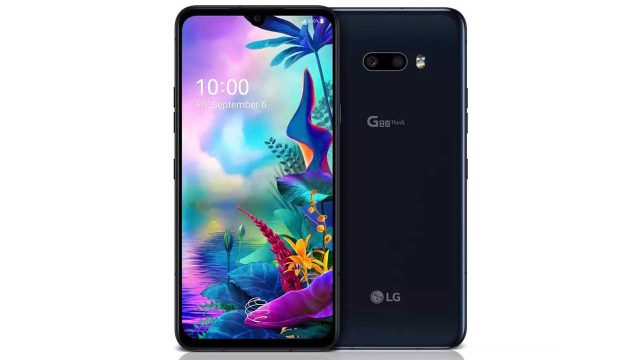 For optics, there is a twin-lens rear cam comprising of a 12 mp standard lens and a 13 mp ultra-wide sensor. The front notch, on the other hand, houses the selfie cam of 32 mp resolution though LG said that has been configured to shoot images at 8 mp by default.

Now coming to what can be considered the biggest draw with the G8X, the phone can be attached to the case via a USB-C port. Once attached, the secondary display has to be toggled on via the quick settings button for it to be functional. The secondary screen again is also an OLED panel of the same dimension as the phone’s display, complete with the notch at the top. LG, however, stated the notch is non-functional on the secondary screen and is there for maintaining aesthetic symmetry.

As for the use the additional display can be put to, well the possibilities can be endless. The best-case scenario is, of course, multi-tasking as one can watch a video on one display while catch up with, say an email on the other. The setup is also convenient for those who need to type a lot as one of the displays opens up entirely as the keyboard.

The extra display can also mirror what is being shot on the selfie or the primary cam. It being retractable to 360-degrees, those whose images are being taken via the primary cam can see how they are looking via the secondary display. Mention must also be made of the 2.1-inch display at the front which serves to display the time as well as the occasional notifications.

Unfortunately, it’s only the LG apps that have native support for the secondary display at the moment. That somewhat limits the scope of the extra display at the moment though things could change in the future. Also. it would be interesting to see how the latest Android 10 would feature on the phone given that it comes with inherent support for dual-screen displays.

In the end, the new LG G8X ThinQ may not be as flamboyant as dual-screen phones but has its appeal. All of it could come down to pricing and if the phone is priced right, there shouldn’t be any dearth of takers for the same.