Inferse.com
Home Technology OnePlus has its global launch of the new OnePlus 7T and OnePlus... OnePlus has launched in India its latest OnePlus 7T smartphone as well as its new OnePlus TV, the latter being the first time it has ever got into anything that isn’t a smartphone. Both the devices have been launched in India first and will be introduced in other parts of the world soon.

Coming to the smartphone first, something that has already earned the company worldwide recognition, the new 7T is only expected to carry on with the legacy of its predecessors with elan. After all, the phone has all it takes to script a superb success story, which includes the style, looks, build and of course internal specs.

For instance, the phone comes powered by the latest Snapdragon 855 Plus chipset that works in conjugation with an 8 GB RAM. There are two options though when it comes to internal storage – 128 GB and 256 GB. OnePlus also stated the memory is of the UFS 3.0 type, which in real-world terms mean almost twice the speed of operation compared to what previous-gen OnePlus phones were capable of. 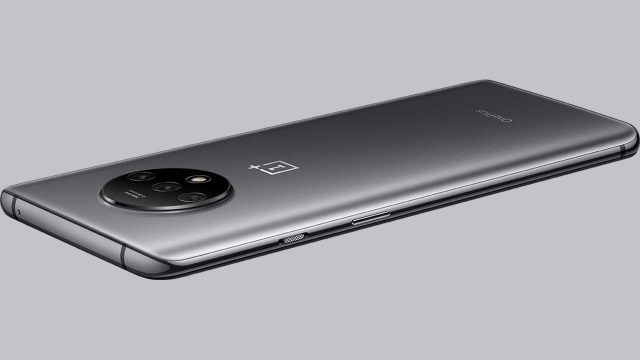 The Chinese company is also offering 5 GB of cloud storage completely free. That is not all as there also is another 50 GB of free storage for the taking for buyers of the 7T. However, the offer is valid for the first year only and will attract charges from the next year onwards though the company didn’t reveal how much that is going to cost.

Another highlight of the new 7T is its display, which is all of 6.55-inches and is of the Full HD AMOLED type with a 90Hz refresh rate. The latter allows the display to refresh itself within just milliseconds – 40 milliseconds, to be precise – and is a boon when playing games even though faster refresh rates also comes with battery penalty.

While still on the battery, the 7T comes with a 3,800 mAh unit which supports fast charging via 30W Warp charger that is included in the bundle. Elaborating on the fast charging ability, OnePlus said its 23 percent faster than previous-gen Warp charging facility.

Moving over to the rear, which is done up in frost mist matte glass, the highlight here is the three-lens camera arrangement all placed within a central circular platter. The three-lens camera system comprises of a 48 mp primary sensory, a 12 mph telephoto lens of 2X optical zoom, and 16 mp ultrawide sensor having a 117-degree field of view. For selfies, there is the 16 mp front cam accommodated within a tear-drop notch at the front.

Another aspect where the 7T scores a first is its OS, it being Android 10 and is the first phone to offer the latest Android version right out of the box. The company’s proprietary OxygenOS runs on top. Among the other salient features of the 7T flagship phone is its in-display fingerprint sensor as well as face detection feature. 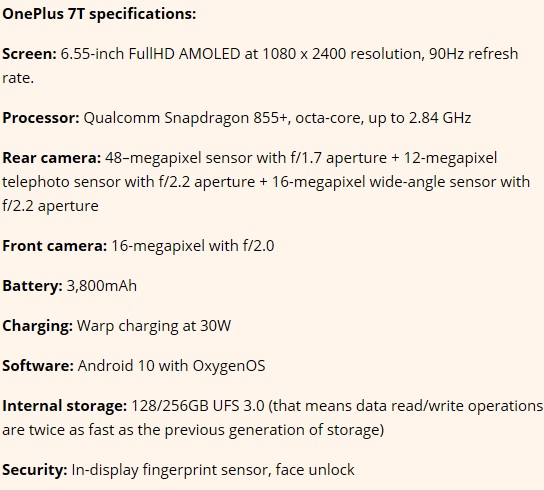 Both the models offer scintillating 4K resolutions which the company attributed to the use of what it calls as the Gamma Color Magic chip. Elaborating further, OnePlus said the chip works to enhance the picture quality irrespective of the source signal, thereby leading to higher levels of viewing pleasure.

From the specs point of view, the OnePlus TV offers a 55-inch QLED panel having a 16:9 aspect ratio. The TVs also supports both HDR and Dolby Vision and will be running Android which again has been optimized for better user convenience. OnePlus is calling it the Oxygen OS which is in line with its smartphone OS of the same name.

Among the modifications include the ability to connect the OnePlus smartphone which then can be used to navigate through the TVs controls. One can also type and search for movies or shows right from within the phone itself. The TV is also accompanied by a remote which again connects to a Type-C port for charging.

The TV also features three HDMI slots, twin USB ports as well as an ethernet port, besides being Bluetooth 5.0 compliant as well. Chromecast is built-in while there also is the usual array of streaming apps such as Netflix that comes pre-loaded.

Also, while both the TV models are similar, the Q1 Pro still differs from the base model by the inclusion of the soundbar. That again is designed to slide up and remain hidden from plain sight and becomes visible only in the descended state. The soundbar again features eight speakers – six front-facing and two facing rearwards – and allows for 50-watt of sound output.

Both the OnePlus 7T and OnePlus TV Q1 will be available from Amazon, official OnePlus site as well as other sales partners, starting September 28.