AMD has showcased new chips at the CES along with greater plans to see it firmly planted in the entire spectrum of computing segment starting from entry-level desktops to high-performance PCs. That includes second-gen Zen 2, Zen 3, Threadripper, along with a Radeon RX Vega GPU as well.

Its range starts with the Ryzen 3 2200G, a quad-core chip with a base clock speed of 3.5 GHz and a max clock speed of 3.7 GHz under boost mode. The chip costs $99 and includes 8 compute units that promise reasonable graphics processing.

Next up is the Ryzen 5 2400G which is another quad-core chip with a base clock speed of 3.6 GHz and peaks out at 3.9 GHz under boost mode. The chip comes for $169 and is inclusive of 11 Vega compute units as well.

While both the Ryzen 3 and Ryzen 5 are designed to offer reasonable levels of gaming experience at an affordable price range, the latter comes across as a cost-effective solution against comparable Core i5-8400 and Nvidia GeForce GT 1030 chip combo that costs $288 taken as a whole.

Another unique aspect with the new Ryzen 3 and 5 APUs is that they are fully compatible with the 3-series motherboards already in service. This will makes upgrading to the new APUs even more cost-effective as buyers won’t be required to change their existing motherboards. The motherboards will, however, need a BIOS update. Both the APUs will hit markets starting February itself.

Next in line is the Zen+ which happens to be the second generation Ryzen version. And the biggest USP of the Zen+ is that it will follow the 12nm manufacturing process, which the company said will account for a 10 percent performance improvement over current models. The first gen Ryzen CPU were manufactured as per 14nm process. In fact, the processor is already believed to be in the sampling stages and is slated to reach markets by Aug. 2018.

Meanwhile, there is a second gen Threadripper too in the offing, which is slated to go on sale sometime in second half of 2018. Details though are sparse at the moment though it is believed to be based on the Zen+ cores. 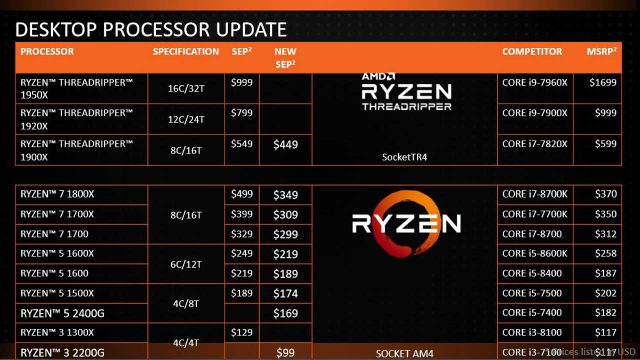 AMD has also shone some light on its graphics chip segment where the new Vega chip built using 7nm process hogs the limelight. The company, however, said the Radeon Instinct Vega chip will be made available to machine learning and other AI-based applications first. From there, it would be the new Navi also built using a 7nm process that would suffice the demands of gamers. Similarly, a successor to the Navi based on the 7nm+ process is also in the cards for a 2020 release.

On the whole, its a bold new beginning that AMD is aiming for with its new range of chips and if there is anyone company that would be feeling the heat more than anyone else, it would be Intel.